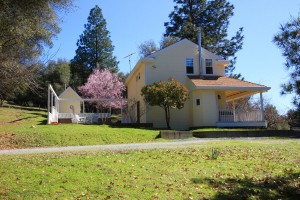 The City of Placerville, population 10,350, is centrally located between Sacramento, the State capitol, and South Lake Tahoe, world-famous recreation center. Situated above the fog line and below the snow line, Placerville boasts an ideal climate with four distinct seasons. Accessibility to Placerville is via State Highway 49 and U.S. Highway 50, along one of the most traveled corridors in California. Placerville’s treasured heritage is reflected in the historical, nineteenth century architecture of it’s downtown core. In addition, Placerville is the County seat and the center of financial, commercial, civic, and Government activity.

Serving as a “hub” for many nearby destinations and activities, Placerville is well situated. Premier wineries, Apple Hill Ranches, Historic Coloma, the American River, and the El Dorado National Forest are all located within minutes of downtown Placerville. The future of Placerville’s business economy will continue to be strengthened and infused by these established and newly developing areas of opportunity surrounding the hub.

Within the hub, local merchants, property owners, and Government officials are striving to insure economic vitality for Placerville. These groups are working together on business improvement and revitalization projects to preserve, promote, and enhance the quality of life for all in the community. Location, climate, a rich heritage, and a high level of commitment and pride has allowed Placerville to emerge as “the destination” in El Dorado County.

The history of Placerville began with the “rush for gold” to California in the 1840’s. The highly publicized discovery of gold in the tail race section at Sutter’s Mill in Coloma (only 10 miles from Placerville) in 1848 resulted in the migration of thousands of fortune-seekers to Northern California in the mid 1800’s. The town of Placerville was named after the placer deposits found in the river bed between Spanish Ravine and the town plaza. During the gold rush, Placerville became an important supply center for the surrounding mining camps.

Placerville was also known as “Hangtown” in it’s early days. Although many stories exist on how this name was acquired, the most famous story involved a colorful event that occurred in January of 1849. A gambler named Lopez gained a lot of attention for his big winnings at a local saloon. After he retired for the evening, several men tried to overpower him. Lopez fought back, and with the help of others, the robbers were captured. During their “flogging”, three of the robbers were also accused of being wanted for a murder and robbery that occurred at a gold camp on the Stanislaus River.

An important historic landmark that still remains on Main Street is the Bell Tower, standing as a monument to the city’s volunteer firemen. The Bell, placed in the tower in the plaza in 1865, was used as an alarm system to call out the firefighters. This tower has watched most of Placerville’s history pass beneath it for well over 100 years. It has been remodeled, relocated, and most recently, renovated. Today it proudly stands as a monument to honor our city’s volunteer firemen. The history of the Bell Tower began back in 1856. Three fires that year in April, July and August, claimed most of Placerville’s business section. The need for an alarm system to call the volunteer fire department was obvious, and a bell was ordered from England. Cast in 1860, the bell arrived in Placerville in 1865. The city gave it’s approval to place the bell in a tower in the plaza. All this was done at a cost of $380.00. Today, the Bell Tower serves as a gathering place for parades, celebrations, and other Historic Main Street events, many sponsored by the Placerville Downtown Association.

Information provided by the city of Placerville, CA: http://www.cityofplacerville.org/our_city/about/profile.asp